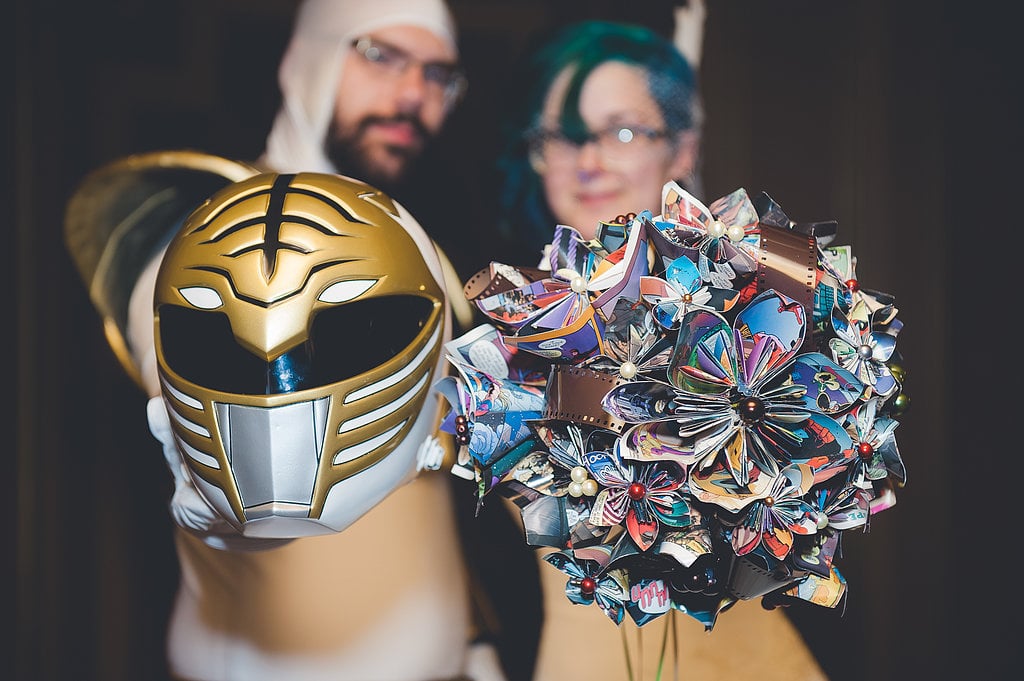 It's Morphin' Time! The White Ranger Makes an Appearance at the Cutest Nuptials

Beyond deciding suit and tie colors, grooms don't get much sartorial creativity when it comes to wedding attire, but that wasn't the case at Joe and Felicia's wedding. Rather than meeting Felicia for a first look in a run-of-the-mill suit picked out at the mall, Joe revealed a white Power Ranger suit. The bride who said the best moment of the day was getting married to her Power Ranger clearly did not mind.

That's not the only geek reference the couple included in the rest of the day. Felicia's bouquet is actually comic book pages crafted into petals, which was caught by one of her bridesmaids, Sean. Centerpieces, origami programs, and decorations made of perler beads were a DIY affair that the whole bridal party partook in.

And then there's that cake. Yes, that is a hobbit house modeled straight from the Shire. Molly Przybelinski of MollyCakes handcrafted the red velvet cake and sculpted the fondant Lord of the Rings-themed toppings of the root beer float and creamsicle-flavored cupcakes.

Did embracing the DIY and creating the wedding of their dreams stress the couple? No way. Future geek brides, heed Felicia's advice and relish in the planning process "because there's no point in getting wound up because you will not end up enjoying your day." Now on to the geek-tastic accoutrements.

Fashion News
Here's What It's Like to Try On a Virtual Wedding Dress, Straight From a Bride-to-Be
by Sarah Wasilak 6 days ago

Fashion News
In Beautiful News, Brandon Maxwell Is Gifting Wedding Dresses to Brides in Need
by Nikita Ramsinghani 1 week ago

Wedding
My Destination Wedding Is Weeks Away, and Here's How Coronavirus Is Affecting It
by Jada Welch 2 days ago

by Monica Sisavat 10 hours ago