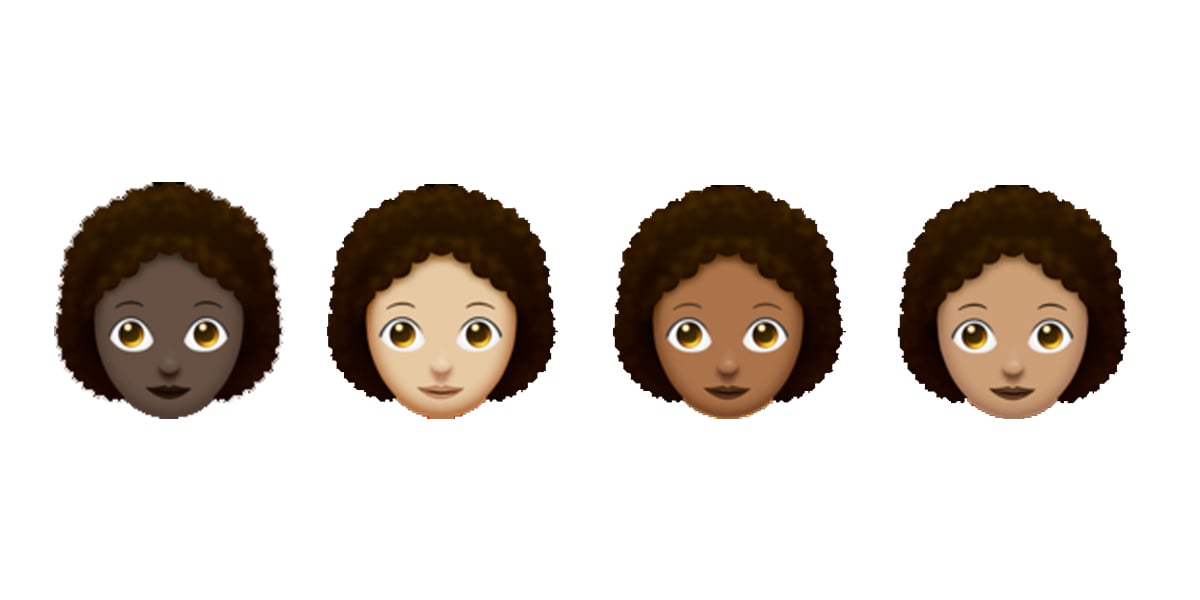 We were over the moon when we learned redhead emoji were officially coming in 2018. Now, it looks like we'll see another step forward for more diverse representations of people, this time with natural hair.

On Dec. 4, Unicode Consortium (responsible for choosing emoji for all platforms) debuted its potential new ones for 2018. They won't be finalized until January 2018, but so far the curly hair emoji are a promising addition. In the proposal available to the public, the official description of these emoji says that they're "used to represent either curly or afro hair." Natural hair vlogger Ciara Anderson (this photo of her in particular) was cited as inspiration for the emoji. As with all emoji, the curls will be available on a range of skin tones.

Related:
Redhead, Natural Hair, and White Hair Emoji Might Be Coming Our Way

Despite the necessary addition of natural hair to the emoji catalog, it seems Twitter was rather underwhelmed with the proposed illustration. "Sis got a whole mullet...deep down we knew this was coming," Twitter account @blkgirlculture critiqued. Many replies all had the same sentiment.

.... is that supposed to be natural hair? https://t.co/jvvXMfBTC9

Sis got a whole mullet.. deep down we knew this was coming pic.twitter.com/pIbbcFZ0vC

Haha my afro does not look like that at all. 😂

just make the emoji with the natural hair WAY BETTER give me some curls or something .. https://t.co/uSWtyLf0jk

Others, however, were celebrating the fact that a natural hair emoji could finally be an option.

I'm excited about the natural hair emoji!!!! Yassss bitch! I needed something to properly express myself! https://t.co/TCg6mO8a08

What do you think? Are you pleased with the natural hair emoji or think it could be better? Sound off in the comments.

Finally, Natural Hair Emoji May Be a Reality in 2018!  originally posted on POPSUGAR Beauty
Beauty NewsWomen Of ColorEmojisNatural HairiPhoneTech
Around The Web

Beauty News
There's Already a Wait List For Peace Out's New Brightening Pads, So Clearly I Had To Try Them
by Danielle Jackson 1 day ago